In the fall of 1974, after attending a few years at Berklee College of Music Walter Thompson moved to his family’s summer home in Woodstock, New York. He applied to and received a grant from the National Endowment on the Arts to study composition and woodwinds with Anthony Braxton. During this period, he also studied dance with Ruth Ingalls.

Woodstock during the 1970s was an important place for the growth of creative music. This was largely due to The Creative Music School (CMS), founded by Karl Berger whose vision was to invite composers and performers such as John Cage, Ed Blackwell, Carlos Santana, Don Cherry, Anthony Braxton, and Carla Bley among others, to give 2-week master classes with the students and often each session would culminate with a performance. 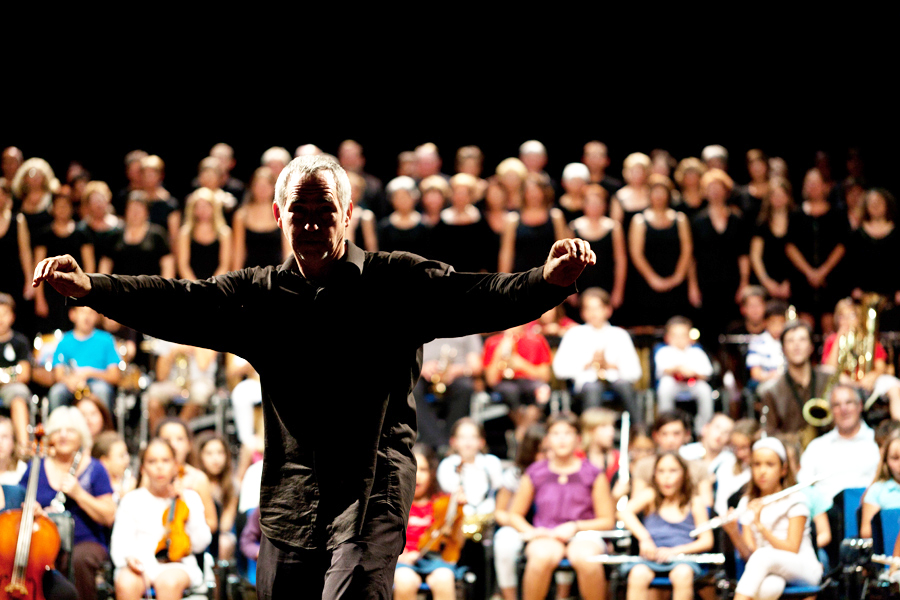 The CMS was, in the earlier years, closed during summer and many of the students would stay and live in Woodstock until the school re-opened. During Thompson’s first summer he organized jam sessions with these students and formed his first orchestra. His group included 22 musicians and 7 dancers – the dancers would improvise to material performed by the musicians. Thompson produced a series of 3 concerts at Woodstock’s Kleinert/James Gallery. The focus of his work with the orchestra was on compositions incorporating sections of open form improvisation. It was during these early days that Thompson created his first signs that would later grow to become the Soundpainting language.

The first gestures of Soundpainting were created in the moment during the opening concert. Thompson had notated a composition where the basic rule for each player, when performing a solo improvisation, was to make a relationship to the notated material. The first person to take a solo did not follow the rule and Thompson felt that in order to maintain the integrity of the piece he needed to come up with a way to guide the composition behind the soloist. He decided to create a sign asking the other performers to play a specific content behind the soloist. In the moment, he created the gesture Long Tone and pointed at several players and gestured to them to begin. The Long Tone gesture was easily understood and executed by the performers and a few minutes later Thompson created the gesture Pointillism which was also readily understood and performed. After the concert Thompson continued to develop his signs and over the next few years in Woodstock Thompson would develop 40 new gestures.

In 1980 he moved to New York City and formed The Walter Thompson Orchestra (then known as The Walter Thompson Big Band). During the first year with his orchestra, while conducting one of his notated works in concert in Brooklyn, New York, Thompson wanted to communicate with the his orchestra and decided to use some of his signs. Trumpet 2 was soloing and during his solo Thompson asked one of the other trumpet players to create a repetitive background behind the soloist and he signed the phrase: Trumpet 1, Background, With, 2-Measure, Feel; Watch Me, and then beat a 4 pattern to bring Trumpet 1 in but, Trumpet 1 did not respond, he stared at Thompson with a blank look. Thompson had never used his signs with his new orchestra and they had no idea what was meant by the gestures. A week later at rehearsal several members of the orchestra asked what the signing was about. Thompson taught the orchestra a few signs and they responded favorably to it and encouraged Thompson to continue developing the language. During the next 10 years, Thompson developed Soundpainting into a comprehensive sign language comprising more than 200 gestures for composing in real time with musicians.

In the mid 1990’s Todd Reynolds, who was a member of the Walter Thompson Orchestra had asked Thompson numerous times if he would teach him Soundpainting. Thompson’s first answer was no, but finally he changed his mind and decided to teach. This was the beginning of Thompson sharing the Soundpainting language with others around the world.

“My first opportunity to develop Soundpainting for Actors came in 1990. I was living in New York City and received a commission from Lincoln Center. I was asked by the organizer of the Lincoln Center Out of Doors concert series to compose a work that would involve the audience. At this time my orchestra was solely made up of Musicians. In order to meet the requirements of the commission, I decided to include two Actors from the Irondale Theatre Ensemble (I was their music director at the time). I taught Actors Leese Walker and Josh Taylor Soundpainting and added them to the orchestra. Their role in the piece was to respond to the gestures incorporating both, voice and physical movements. During the performance the Actors, as a Default, would address the audience whenever they were given a sign. The audience became engaged and at times would speak back at them. I would use some of what the audience was saying and incorporate it into the composition. This back and forth with the public was the basic way I worked throughout the entire composition. The experience of Soundpainting both Musicians and Actors at the same time was exciting, challenging and presented new territory to explore – a new world of composing opened up for me. From that point on, Actors became a permanent part of my orchestra.

It was a few years later that I had the opportunity to develop Soundpainting for Dancers. Choreographer Margery Segal, who at the time, had a dance company based in Austin, Texas, commissioned me to compose a Soundpainting piece for 100 women Dancers and an orchestra of 35 Musicians. In preparing to add Dancers to Soundpainting, prior to our first rehearsal with group of 100 Dancers and 35 Musicians, I worked with Margery for two weeks to clarify and codify what each Soundpainting gesture meant for Dancers. Some gestures were easy to translate to movement while others were not. For example, it took us more than two weeks to codify what a Long Tone was for Dancers.

The piece was to be performed outside on the Congress Avenue Bridge, in Austin, from 4pm to 5pm – the Dancers dressed in white and the Musicians in white and black. An important part of the piece, though difficult to rehearse, was the incorporation of more than 2 million bats. Each day around 4:45 PM the bats, which were living in the pilings of the bridge, would fly out to hunt for food – when it happened, the sky turned black. So, I had to time the hour-long piece so it would end with the evening feeding frenzy of the bats. Happily, it all worked out – the Dancers and Musicians performed superbly and the bats came out just as I had hoped. I was very pleased with the entire piece.

After my work with Margery I went back to New York City and worked with choreographer Gus Solomon’s in furthering the development of Soundpainting with Dancers. I added Gus and two other Dancers to my orchestra thus creating my first multidisciplinary group incorporating Musicians, Actors, and Dancers.

In the late 1990s Thompson was invited by Dave Liebman and Ed Sareth to give a Soundpainting workshop at the International Association of Schools of Jazz (IASJ) Conference in Santiago de Compostela. This was the first time Thompson had given a Soundpainting workshop in Europe. Following the conference, there were many invitations to perform and teach Soundpainting – most notable being an invitation from François Jeanneau to give a week-long workshop at the Conservatoire de Paris. Following Thompson’s residence at the Conservatoire, Francois dedicated himself to learn the language and was soon composing with it and giving Soundpainting master classes and concerts. Today Francois Jeanneau is a driving force, teaching and giving Soundpainting concerts around the world.

The acceptance and usage of the Soundpainting language in Europe has grown rapidly since Thompson’s first workshop in Spain. Today there are many very fluent Soundpainter’s in Europe and the United States who are very active in teaching the language. Some of them are: Vincent Le Quang, Sabine Vogel, Evan Mazunik, Sonja Korkman, Christophe Mangou, Jeffrey Agrell, Angelique Cormier, Gustav Rasmussen, Ketil Duckert, Sylvain Mazens, Etienne Rolin, Sarah Weaver, Todd Reynolds, Rafaele Arditti, and many others.

Soundpainting is now being used in the professional and education arenas in many countries around the world.

The Soundpainting language is a living and growing language, which presently comprises more than 1200 gestures. Spoken languages are changing and growing all the time. Whether by necessity or passage of time, humans inherently create new concepts and modify older ones to fit contemporary times – new words are created, older words become passé, shortcuts and slang are developed etc. The Soundpainting language shares this same growth pattern. In order to address the needs of growth and to keep the language from spreading out into hundreds of separate dialects, each year experienced Soundpainters come together to further develop the language in what are known as Soundpainting Think Tanks. Each Think Tank is an annual conference where I invite Soundpainters from around the world to come together to share ideas and help further develop the language in all the disciplines. To date (2014) there have been 17 Think Tanks. 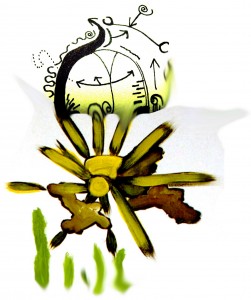